A series of informal score events that take place on winter weekday evenings. The format is a one hour score event. Harlequins' WEE are arranged for Thursday (or occasionally Tuesday) evenings whilst our neighbour club Octavian Droobers hold their "After Dark" events on Wednesdays. 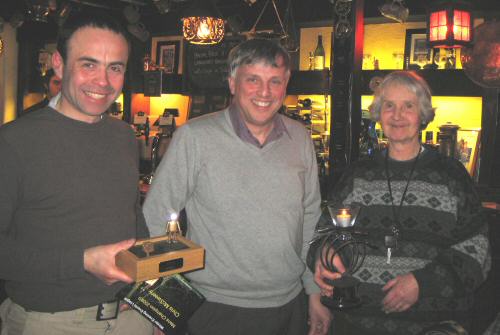 Barry the WEE coordinator says:
"6 events planned, five actually took place, 33 different competitors, and 11 to 19 competitors per event. All good areas really well thought out courses and use of unfamiliar parts of some such as at Lickeys and Walton Hill. A great season, hopefully something for everyone, well anyone who likes running round with a lamp on their head in the snow and ice. I can't understand why more people do not do it? I hope all those who did take part enjoyed it. My sincere thanks to the planners who braved all the elements to put on such a good show. Not forgetting the people in the background trying to get us permissions, others issuing planning information, updating maps, sorting equipment, collecting controls and at the end of the day putting everything back in the stores. Thanks to everyone involved."

2008 - 2009 Programme
All events on Thursdays unless otherwise stated

Volunteers to organise and plan events are very welcome and will receive 25 points for their efforts. Volunteers please contact the league coordinator.

These events are intended as a good introduction to night orienteering for the newcomer, but will still be competitive for others. There will be a mixture of relatively easy controls on line features, such as paths, fences, ditches etc and more difficult controls for the more experienced night orienteers. The line feature controls help considerably for relocation and will normally allow the opportunity to go for some of the other controls. Controls will have different point values depending on their difficulty or distance.

The time for starts is typically 18:00 to 19:00 but it does depend on when it gets dark! If cloudy the first runner normally can go off 10 minutes after the end of "Civil Twilight".

Obviously a torch or headlight is needed (the more powerful the better)! Participants are responsible for their own safety and take part at their own risk. PLEASE NOTE that the carrying of whistles is compulsory at all HOC events (we usually have a few to hire or borrow).